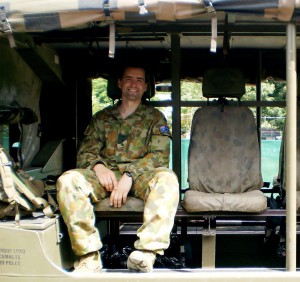 In 2015, Australia and New Zealand commemorate 100 years since the beginning of WWI’s Gallipoli, a campaign famous for its heroism and infamous both for its terrible death toll and the horrific conditions on the battlefield. Despite generations of war veterans having suffered—often in silence—intense post-war psychological disturbance, and the associated depression, alcoholism, violence and suicide, post-traumatic stress disorder (PTSD) was not formally recognised until 1980. It remains a misunderstood, misdiagnosed condition, for which there is no widely effective treatment.

“PTSD in one shape or form, has been around forever,” says Luke Ross, an Army Reserve Captain and military psychologist (whose day job includes teaching sales psychology as a capability development director with GE). “My grandparents, who both served in the RAAF, would talk about how so-and-so was having ‘troubles’.” Shell shock or combat exhaustion were frequent diagnoses for traumatised servicemen returning from the first World Wars. Some early medical-discharge papers were even cruelly marked “premature senility”, “lack of moral fibre” or, slightly more kindly, DAH, “disordered action of the heart”. Vietnam veterans were diagnosed with stress-response syndrome, a term which first entered the mental-health guidelines in the early 1950s. PTSD was formally classified as an anxiety disorder in 1980, but the mental-health guidelines that define such conditions continue to be revised, and research continues into identifying physical and psychological vulnerabilities, in order to improve both diagnosis and treatment.

Luke Ross, Army Reserve Captain military psychologist and GE employee (pictured in his former capacity). “The reason I became a psychologist was because I like helping other people function at a higher level,” he says. “My job at GE is like being a sports psychologist, working with high-performing individuals and helping them to perform even higher. I do the same in the Army, because the Army is a high-performing, very mission-focussed organisation. I’m a very proud serviceman, and I’m incredibly proud of the service that our soldiers give.”

The recognition of PTSD and the fading of stigma around other mental health disorders has been a positive step in the military. “We have mental health days where we have presentations from serving members who’ve suffered PTSD saying how it manifested and what they did to get help, to make sure that we don’t have people sitting there saying, ‘I just had to deal with it on my own’,” says Luke Ross. “PTSD is an insidious disturbance that lingers and lingers, but it is far more responsive the earlier someone gets help.

I know a Vietnam vet who’s suffering PTSD and is only starting to get help now. We’re unwinding 40 years of how he has been habitually living with and managing his PTSD, versus if you can get someone at the one-month mark. A lot of PTSD becomes learned—such as self-medication, dysfunctional thinking and avoidance behaviours—and the longer they’re present, the more they become part of how that person operates.

“Getting to it early is key, so that means understanding what are the biochemistry and cognitive changes that occur with a mild traumatic brain injury [MTBI], which is often present with PTSD in the veteran community,” continues Ross. “What tests can we get on the battlefield to detect it? That’s where the increase in sophistication of our scanning—especially PET and MRI—is huge, because you can see the anatomical as well as the circulatory details of the brain. This new technology could lead to battlefield blood-tests for PTSD and MTBI.”

The diagnosis guidelines for PTSD were updated as recently as 2013 and, for now, paper-and-pencil tests are the standard for military psychologists assessing the brains of servicemen and women, both pre-deployment, pre-extraction and post-extraction. “We’re screening for any disturbance in their psychological functioning, and for critical incidents where they’ve been faced with situations that could have a likelihood of creating PTSD,” explains Ross. “There’s a range of paper-and-pencil tests that we use in conjunction with screening interviews, and when we find elevated scores, that’s when we start putting treatment in place.”

Army psychological assessments of soldiers at the end of a tour take place in the field; pictured is a psychologist’s interviewing set-up in an open-air chapel. “You score the paper and pencil tests, and then you have a conversation with them to ask about their deployment experiences, where they went, what they did, any critical incidents,” explains Army psychologist Luke Ross.

Brain-imaging research will be critical in identifying the physical characteristics that may help explain why some individuals subjected to trauma develop PTSD, while others exposed to the identical trauma do not. “You can be in the same armoured vehicle and only one of the four in the vehicle will subsequently develop mental health issues,” explains Miriam Dwyer, CEO of the Gallipoli Medical Research Foundation. “When it comes to breaking your arm, we know how to fix it; or if you have blood-pressure issues, we can sort that out. But when it comes to mental health issues and the brain, we have a long way to go.”

Dwyer is excited to see the outcomes of a major study the Gallipoli Medical Research Foundation is currently undertaking into the physical health and genetics of 300 Australian Vietnam veterans. Of the 300, half have PTSD, and half do not; and in a sub-study, 100 of the veterans (50 sufferers and an equal control group of non-sufferers) have undergone brain imaging, with the imaging services provided pro bono by Queensland XRay and the study itself sponsored by RSL Queensland.

Professor Stephen Rose of the CSIRO is the research scientist charged with analysing the 100 sets of brain imaging and will examine both brain structure and connectivity. Magnetic Resonance Imaging (MRI) is being used for the brain-structure study. “MRI gives you superb soft-tissue contrast and we can measure the volume of structures in the brain,” explains Rose. “We’re looking at the volume of particular parts of the brain that may predispose individuals to PTSD, believed to be the hippocampus and the amygdala, which are in the temporal lobe, and some frontal lobe structures as well, particularly the anterior cingulate. These parts of the brain seem to be very vulnerable to injury, which may predispose people to PTSD, especially in the military. We can measure the volume of these regions of the brain very accurately and look at cohorts of Vietnam veterans who have PTSD, and compare those with cohorts of Vietnam veterans who don’t have PTSD. That may give us some insight into whether these parts of the brain are associated with PTSD, or predispose people to developing it.”

The study is also measuring the brain’s white-matter tracks. “A combination of diffusion imaging and a technique called tractography allows us to generate beautiful white-matter pathways, showing how the brain is connected,” explains Rose.

“We’re very interested in looking at how these particular vulnerable parts of the brain are connected, and whether individuals with PTSD exhibit different patterns in connectivity of these brain regions.”

Rose explains how this research technique is enabling scientists to see the effect of mild traumatic injury—diffuse white-matter injury—on the brain, which is hard to detect using standard MRI techniques. These kinds of invisible injuries are prevalent in the military and can occur, for example, when a soldier is near an explosion, even if there is no observable physical injury. “We know from our studies in brain ageing, especially around dementia, that there is an accumulation in the brain of a protein called phosphorylated tau,” says Rose. “The phosphorylated tau forms neurofibrillary tangles in the brain, which are toxic to neurons. What is postulated is that having a mild head injury may increase the accumulation of this toxic material in these vulnerable parts of the brain, and may increase the risk of people going on to have PTSD. There’s a lot of interest from the military in measuring these subtle brain injuries.”

Rose stresses that the research is in its early days, but he’s excited by its potential to help. “GE has a number of PET tracers available to measure tau and other dementia-related pathologies,” he says. “This is really at the forefront in PTSD research, looking at the link between premature brain ageing due to concussion or a blast injury, and whether this accumulation of tau predisposes people to go on to have PTSD.”

These images show tau and beta-amyloid PET tracers being used for Alzheimer’s research, and were produced by the CSIRO working with Professors Chris Rowe and Victor Villemagne at Austin Health. There are parallels between this approach to brain-disease research and the latest PTSD study, in that specific tracers that bind to abnormal brain matter are being used in conjunction with PET scans. These scans show how the tracers light up abnormal areas of the brain: red is more strongly abnormal, while grey, purple and blue are “no abnormality”.  HC = healthy control; AD = person with Alzheimer’s disease. Flutemetamol is the PET beta-amyloid tracer and THK5317 is the PET tau tracer. Credit: Austin Hospital.

“The PET tracers that GE has developed enable specialists to study biochemical changes inside the brain that indicate either short- or long-term damage to brain tissue, which may be the beginning of a disease developing,” explains Dr Tim O’Meara, regional research manager for GE Healthcare Australia and New Zealand. “The PET tracers are highly specific and enable specialists to look for ‘hotspots’ in the brain, which previously was only possible post-mortem.

As Miriam Dwyer says, “we understand the consequences from a psychological perspective of PTSD, but not the specific causes”, which is why this research is so important. “We know what the symptoms are when you develop PTSD, but the treatments are still not great. The standard treatment is exposure therapy, basically re-exposing the individual to the traumatic memory in a controlled environment, while delivering education, cognitive restructuring and fostering improved coping skills. And that works well in about one-third of patients; doesn’t work at all in another third and it can actually have a negative impact for some patients if delivered incorrectly. There aren’t any very good drugs in development for PTSD, probably because of the complex combination of emotional, cognitive, behavioural and biological symptoms. We’re still really trying to understand how we can effectively engage and treat all sufferers—not just one-third. We’re working with the veteran community and the ADF to identify those at risk of developing mental-health issues or readjustment issues. And along with that, we are studying the genetics, epigenetics and biomarkers to see if there’s an objective clinical way of identifying those at risk, as well as taking a holistic approach to the diagnosis and treatment.”

Luke Ross believes all this research will be a game-changer for Army psychologists. In the meantime, he’s focused on looking out for servicemen and women every step of the way. “I’m incredibly proud of the service that our soldiers give,” he says. “I’ve been really, really happy over the past 20 years to see the difference in how the Army treats those with psychological distress. We’ve got much better at looking after our Diggers—and the first job of every officer is to look after your Diggers.”

All PET brain scan images in this story, including the feature image on the home page, relate to Alzheimer’s research.

Trauma and neglect, and the brain.
Scroll to top