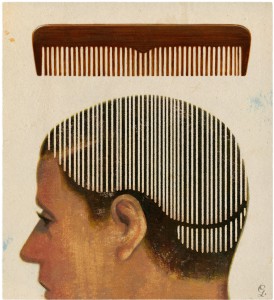 IN 1890, the American psychologist William James famously likened our conscious experience to the flow of a stream. “A ‘river’ or a ‘stream’ are the metaphors by which it is most naturally described,” he wrote. “In talking of it hereafter, let’s call it the stream of thought, consciousness, or subjective life.”

While there is no disputing the aptness of this metaphor in capturing our subjective experience of the world, recent research has shown that the “stream” of consciousness is, in fact, an illusion. We actually perceive the world in rhythmic pulses rather than as a continuous flow.

Some of the first hints of this new understanding came as early as the 1920s, when physiologists discovered brain waves: rhythmic electrical currents measurable on the surface of the scalp by means of electroencephalography. Subsequent research cataloged a spectrum of such rhythms (alpha waves, delta waves and so on) that correlated with various mental states, such as calm alertness and deep sleep.

Researchers also found that the properties of these rhythms varied with perceptual or cognitive events. The phase and amplitude of your brain waves, for example, might change if you saw or heard something, or if you increased your concentration on something, or if you shifted your attention.

But those early discoveries themselves did not change scientific thinking about the stream-like nature of conscious perception. Instead, brain waves were largely viewed as a tool for indexing mental experience, much like the waves that a ship generates in the water can be used to index the ship’s size and motion (e.g., the bigger the waves, the bigger the ship).

Recently, however, scientists have flipped this thinking on its head. We are exploring the possibility that brain rhythms are not merely areflection of mental activity but a cause of it, helping shape perception, movement, memory and even consciousness itself.

What this means is that the brain samples the world in rhythmic pulses, perhaps even discrete time chunks, much like the individual frames of a movie. From the brain’s perspective, experience is not continuous but quantized.

The telling fact, for perceptual scientists, is that this illusion can also occur during normal observation of a rotating wheel, in full daylight. This suggests that the brain itself, even in the absence of a strobe light, is sampling the world in discrete chunks.

Scientists have uncovered still more clues. It turns out, for example, that our ability to detect a subtle event, like a slight change in a visual scene, oscillates over time, cycling between better and worse perceptual sensitivity several times a second. Research shows that these rhythms correlate with electrical rhythms of the brain.

If that’s hard to picture, here’s an analogy: Imagine trying to see an animal through a thick, swirling fog that varies in density as it drifts. The distinctness of the animal’s form will oscillate with the density of the fog, alternating between periods of relative clarity and opaqueness. According to recent experiments, this is how our perceptual systems sample the world — but rather than fog, it’s brain waves that drive the oscillations.

This is not to say that the brain dances to its own beat, dragging perception along for the ride. In fact, it seems to work the other way around: Rhythms in the environment, such as those in music or speech, can draw neural oscillations into their tempo, effectively synchronizing the brain’s rhythms with those of the world around us.

Consider a study that I conducted with my colleagues, forthcoming in the journal Psychological Science. We presented listeners with a three-beat-per-second rhythm (a pulsing “whoosh” sound) for only a few seconds and then asked the listeners to try to detect a faint tone immediately afterward. The tone was presented at a range of delays between zero and 1.4 seconds after the rhythm ended. Not only did we find that the ability to detect the tone varied over time by up to 25 percent — that’s a lot — but it did so precisely in sync with the previously heard three-beat-per-second rhythm.

Why would the brain do this? One theory is that it’s the brain’s way of focusing attention. Picture a noisy cafe filled with voices, clanging dishes and background music. As you attend to one particular acoustic stream — say, your lunch mate’s voice — your brain synchronizes its rhythm to the rhythm of the voice and enhances the perceptibility of that stream, while suppressing other streams, which have their own, different rhythms. (More broadly, this kind of synchronization has been proposed as a mechanism for communication between neural networks within the brain.)

All of this points to the need for a new metaphor. We should talk of the “rhythm” of thought, of perception, of consciousness. Conceptualizing our mental experience this way is not only more accurate, but it also situates our mind within the broader context of the daily, monthly and yearly rhythms that dominate our lives.

Gregory Hickok, a professor of cognitive science at the University of California, Irvine, is the author of “The Myth of Mirror Neurons: The Real Neuroscience of Communication and Cognition.”